Good read. I remember when Durham had just two or three special places to eat dinner out. Almost always, I was too broke to go these places, but I did make it to Magnolia Grill a couple of times. I wish we still had Magnolia, but its owners seem to have wisely checked out of the Durham restaurant boom just as it was heating up.

I suspect that our current favorite spot, Gocciolina, is immune from the bubble, because it’s located in a non-neighborhood that will not become fashionable in a hundred million years. 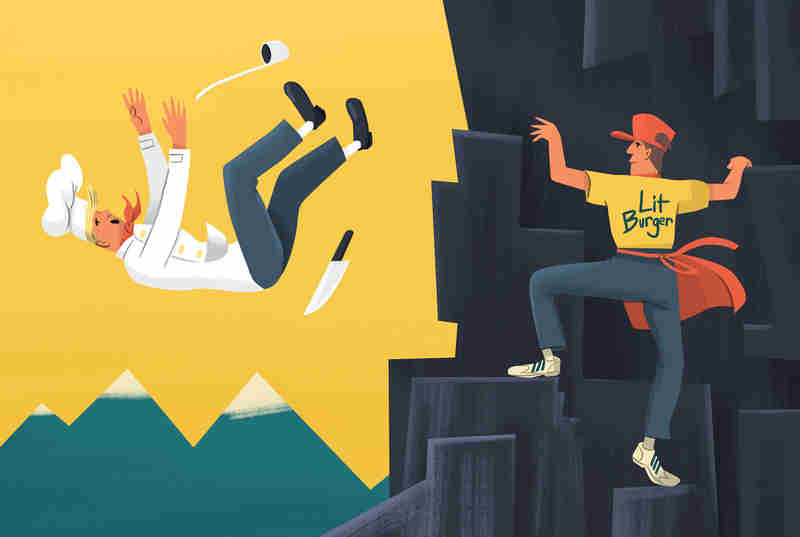 Source: Why America’s Restaurant Industry Is in a Bubble About to Burst – Thrillist

As a resident of Durham, where Pat McCrory is hoping to salvage his governorship by attacking the legitimacy of 90,000+ mostly Democratic early ballots, I really appreciated this rude blast from Dwane Powell.

Such is the fractured nature of public discourse that I feel there’s no good place to discuss something that’s important to this community: our transportation infrastructure. There’s a light rail proposal that will connect East Durham to the west side of Chapel Hill, with two major hospitals en route. The light rail was one of the first development issues I started following when I moved here in 1999. Seventeen years later, we’re really no closer to a solution.

I really don’t have the time or expertise to have a fully informed opinion on this matter, but I used to be a full-bore urbanist. More recently, I got into a long, long Facebook thread that involved people who actually know about these things. Basically, my point was that we should think about whether light rail would just leave the poor citizens who ride our crappy buses further in the rear view mirror of social progress. (This discussion was on June 30, but the difficulties I’ve encountered in trying to link to it reminds me why I am leaving Facebook sometime soon.)

These last couple of days have seen a sudden turn against the light rail. There’s this opinion piece by the chair of the Board of County Commissioners of Orange County. Then there were some tweets by Lauren Horsch of @indyweek, my former employer.

In #DOLRT news, @DukeHealth officials in a letter to @GoTriangle say they cannot support the current proposal. https://t.co/lqnRZ8jqtJ

To this, I replied to three of the few people I know who are knowledgeable about this issue.

@MTBinDurham @elandfried @gladdek Between this and Earl McKee’s N&O piece, it seems like a bad week for DOLRT. Are these serious setbacks? https://t.co/F2Cp4YHMxY

My concern at the moment isn’t the merits of light rail. It’s the paucity of good information, a vacuum created by the collapse of strong local media that is so extreme that I’m reaching to random people on Twitter for their interpretations of major events that are barely being reported.

Very concerned about the future of reporting in Durham with @bullcity heading further south and @LaurenHorsch tackling statewide issues.

The owner of the @bullcity handle is moving to the Queen City. His Bull City Rising blog was a treasured community resource for the few years that he was able to devote to it. Aside from a brief revival a year ago–thanks to the exertions of a temporarily unemployed journalist (and my old boss at the Indy)–Bull City Rising has been dormant, a testament to the limits of citizen journalism.

I’ve got nothing to add to the debate about the rail, because I know little about it. Facebook is said to be the place for this kind of discussion, but I’m not going to it anymore.